I chose your recipe for English toffee out of many I found on line because it called for small portions of ingredients. I then halved the recipe because I had never made toffee before and did not want to waste a half pound of butter if it didn’t turn out.
I realized quickly that I used too large of a pan as the candy became too dry. I splashed a random amount of water into the pan and continued to boil and stir until it turned to the right color (8 minutes was spot on). In spite of all that, the toffee turned out perfect; flavor and texture are great.
I skipped the nuts–don’t like them–and sprinkled milk chocolate chips over the surface of the hot toffee and spread it as it melted. Fantastic! I will never buy another SKor or Heath bar again. An awesome and apparently failsafe recipe. 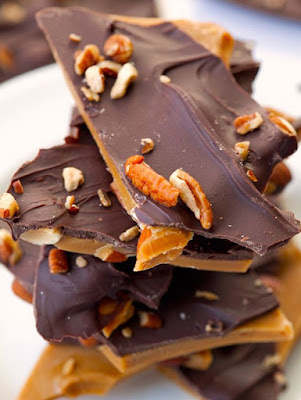